Well Veganuary might be long gone for this year, but if you’re still going meat and dairy free then here’s our list of the top 5 vegan food blogs.  A vegan lifestyle is said to have potential benefits to health, with the main benefits coming from the removal of animal fats from diet.  Meanwhile other people claim it makes them feel fantastic – find out for yourself with the vegan food blogs we’ve found for you below. 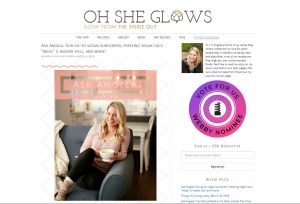 Incredibly Oh She Glows now has over a whopping 500 vegan recipes, making this hands-down one of the top vegan food blogs on the web.  It’s been running for 10 years and has been nominated for multiple awards, pulling in over 1 million unique visitors a year. If this hasn’t made you click the link already, the blog doesn’t just stop at food, covering life as a vegan family, travel tips, baby news and even some great articles about Angela’s experience running a bakery.  If you only look at one vegan food blog in our list, this is the one for you!

The Fatfree Vegan website takes vegan cooking to another level by removing large amounts of fat from the ingredient list.  Susan substitutes water or broth for oil, and apple sauce for the butter or margarine found in her baking recipes.   The blog is linked to a top level recipe site which looks a little dated in comparison to the clean design of the blog which really does a great job of highlighting the gorgeous plant-based recipes on show. Susan takes her photography so seriously she’s gone through 4 cameras putting this great vegan food blog together!

Living up to its name, this site certainly is colourful – before you’ve even scrolled down to see the amazing recipes on offer we were drawn in by its arty header.  The site is run by Ilene, and she’s responsible for creating and photographing all the vegan recipes on show.  She’s been on quite a journey with her diet over her life and this has inspired her to become a health coach and share her wisdom with others.  The photography is fantastic (definitely Instagram-worthy!) and Ilene has even written a plant-based Colorful Kitchen cookbook containing over 100 of the most colourful recipes from the site.

Not living up to its name at all, this site isn’t messy in the slightest, instead featuring a clean, crisp design.  The site is based in Canada and run by Laura, who takes some exceptionally good photographs of her cooking.  The title of the blog comes from an author’s reference to the first appearance of peas in the garden, and it seems that Laura is heavily inspired by top food writing.  She’s been featured in a range of top publications and also now has a cookbook of her own, filled with more top photography which really helps to set this blog apart from the other vegan food blogs out there.  Many of the recipes are gluten-free, and there’s a super useful section on vegan sauces and accompaniments to help liven up any meal.

Despite featuring a disappointingly small number of cakes this vegan food blog was really fun to read as it doesn’t just limit itself to the food, but also provides a great insight into the vegan life of its author Ashlae.  She’s been writing for a number of years and grew up in Ohio.  Her writing is a little more laid-back than some of the other vegan food blogs out there but this makes it very entertaining to read and livens up the recipes, which are also accompanied by some beautiful photographs.  We also loved the section about the evolution of a recipe, giving her readers a behind the scenes glimpse into how recipes come to life.

If you’re feeling hungry after looking at these vegan food blogs, you’ll hopefully love the rest of our food blogs at The Blog Review!

This site uses Akismet to reduce spam. Learn how your comment data is processed.

The Blog Review is a participant in the Amazon Services LLC Associates Program, an affiliate advertising program designed to provide a means for sites to earn advertising fees by advertising and linking to amazon.com.